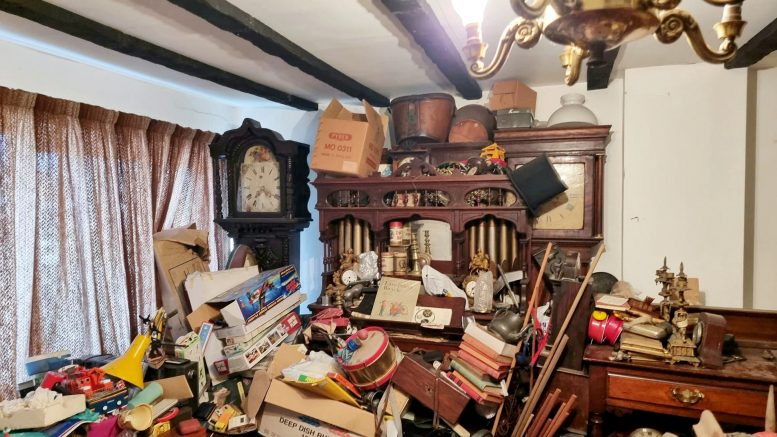 AN amazing treasure trove of antiques worth £50,000 has been found buried underneath piles of rubbish in a hoarder’s home.

The incredible stash was uncovered during a clearance of a Victorian townhouse in Wolverhampton amongst a mountain of bags and boxes.

The terraced property, which belonged to a retired antiques dealer, was crammed from floor to ceiling in every room, concealing the hidden gems.

It has been dubbed “Aladdin’s Cave” by the team who cleared the house, who told how extraordinary spoils “kept emerging unexpectedly” as work got underway.

The hoarder, who spent 60 years stuffing his home with valuables, enlisted their help after moving into a smaller property with his elderly wife.

He created a “collectors paradise” by acquiring a spectacular haul of antiques including eight grandfather clocks worth £1,000, an 18th-century coffer and even a classic 1956 Morris Minor split screen worth up to £6,000.

Hansons Auctioneers, who emptied the home, soon realised the man “had a real eye for items of quality” during his career, seeing them dig through hundreds of bags and boxes.

Owner Charles Hanson said of the unexpected discovery: “It was unbelievable – a real Aladdin’s Cave of objects gathered over more than 60 years.

“The house was packed with hundreds of items jumbled together.

“But far from being valueless, many antiques emerged including quality furniture such as a magnificent 18th-century coffer, which was completely hidden from view.”

He estimates the stunning piece of furniture could be worth between £150 and £250, while a Welsh stick chair they discovered could be valued at £600-£800.

Charles continued: “We regularly come across keen collectors who amass hundreds of items fuelled by their interests.

“But this can turn us into hoarders over time, especially as the years rolls by. It’s not unusual – almost a British pastime in fact.

“We all have a tendency to hang on to things we like or think we may need again. This gentleman collected a mountain of objects.

We kept on searching through cupboards and boxes and treasures kept emerging unexpectedly.

“For example, he had numerous watch parts in a repair room and we uncovered a mahogany shipwright’s chest packed with tools which could sell for upwards of £1,000.”

And another stunning surprise was waiting for the removal team in the garage – as it was housing an original 1956 Morris Minor ‘Split Screen’.

The historical motor was valued at between £5,000 and £6,000 and was described as a “great classic car discovery”.

“There were also quite a few bicycles, some vintage, in the loft space,” Charles added.

“The ceiling had been strengthened and the roof hatch made large enough to accommodate them. Another rather sweet find was a collection of teddies.

“The toys themselves were of little value but some of them had been dressed up with silver pocket watches.

“We kept on searching through cupboards and boxes and treasures kept emerging unexpectedly.”

The former homeowner had even tucked a circa 1790 Staffordshire creamware mug valued at up to £200 amongst a box of worthless pottery, amongst scores of other treasure.

Charles said: “It was a home crammed to the rafters with hidden gems – a collector’s paradise.

“We’re told the owner moved into the property in 1956 and by 1957 the carpet was barely visible. I think it’s very hard to stop collecting if you spend your life in the antiques business.

“A fascination with all things old, historical and quirky is what draws you into the industry in the first place.

“Thanks to this retired antique shop owner’s eye for quality antiques and vintage finds, we can offer a new generation of collectors a multitude of interesting items to bid on.”

The 400 items from the Wolverhampton home will be sold on January 29 and are expected to fetch more than £50,000.